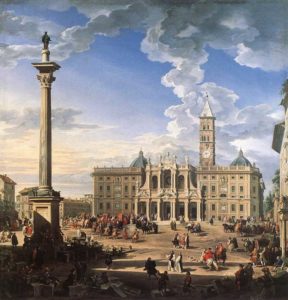 The Navratri Basilica of Names: PART-I

Many tourists and a few pilgrims visit the splendid basilica of Santa Maria Maggiore in Rome.  They admire the lofty perspectives, rich ornamentation and the marmoreal…

The Navratri Basilica of Names: PART-II

“So now, O Sons of the Thought, listen to Me, to the Speech of the Mother of your mercy, for you have become worthy of the…

Worshipped in an unknown and secret place

All energies that are Her creations

Presiding deity of the sacred waters

Her heart overflows with compassion

The entire creation emanates from Her

She is the power behind all knowledge

Residing in the thousand petalled lotus

“Blessed are the few that serve Thee, the flood of consciousness and bliss, having, as thy abode, the mattress of  Paramshiva, laid on the couch of the multi triangular form of Shiva, in the mansion built of Chintamani stones, attached to the pleasure garden of Nipa trees, in the isle of gems, surrounded by an avenue of Kalpa trees and situated amidst the ocean of nectar”

She dwells in the mansion bedecked with wish fulfilling precious stones

She is in the centre of the orb of the moon, meaning also Sahasrara

She is in the centre of the ocean of nectar.  She is the abode of bliss

Her eyes turn inwards in enjoyment of spiritual ecstasy

The bliss of brahma.  There are various grades of bliss and this is the highest

The bliss resulting from Yoga.  The bliss of Turya state

Brilliantly red as immersed in Brahmananda

She rains the quintessence of nectar.
The devotee feels incomparable bliss in this state.
Here culminates the Kundalini-sadhana

She confers unbroken stream of bliss

Confers the bliss of liberation

Giver of the unequalled bliss of liberation

Fond of honey which refers to the bliss of Liberation

She is and gives the bliss if the secret nectar

Ambrosial rain which extinguishes the forest fire of samsara,
the cycle of births and deaths

Bhakta-Chitta-Keki-Ghana-Gahana
Just as a peacock dances with pleasure at the sight of the clouds,
even so, she makes the mind of the devotee dance with bliss

Paramoda
Of the form of ultimate bliss of realization

Madhumati
She is of the form of the consciousness of bliss

Priyamkari
One who grants things dearest to her devotees

Nandi-Vidya
The knowledge that produces Ananda or bliss

Kshipra-Prasadini
Who showers Her grace on Her devotees very quickly

Ramani
Delightful to Her devotees

Chideka-Rasa-Rupini
Experience of the attributeless consciousness, which is also experienced
as a matter of bliss, She is the bliss of reality at its core

Madhvi-Panalasa
Inebriated with the drinking of ambrosia

Svatmananda-Lavibhuta Brahmadyananda-Santaith
All the bliss enjoyed by the beings from Brahma downwards put together
is but a drop in the ocean of Bliss enjoyed by Herself.

Sat Chit Ananda
Truth, consciousness and bliss, the nature of the divine Self or Atma.

Satyananda-Swarupini
Of the nature of Truth and Bliss

Svabhava-Madhura
Natural sweetness. She resides in the heart of Her devotees as bliss or Ananda

Rasajna
She is the power behind all modes of enjoyment and/or She is a lady of taste.

Rasa-Sevadhih
An ocean of celestial bliss

“Having in-filled the pathway of the nadis with the streaming shower of nectar flowing from thy pair of feet, having resumed Thine own position from out of the resplendent lunar regions, and thyself assuming the form of a serpent of three-and-a-half coils, sleepest Thou in the hollow of the Kulakunda”,

We can only express that She cannot be expressed, and this too is not entirely correct.The names of the Sahasrarnamam are an expression of the culmination of Upanishadic philosophy as they express how the essential unity becomes multiplicity in the course of its manifestation. The names have been extracted from the the Shri Lalita Sahasrarnamam, as declared by Shri Hayagriva in the Brahmanda  Purana, based on the English translation by dr Chaganty Suryanarayanamurthy ,(Bharatiya Vidya Bhavan, Bombay 1975).

This scholarly work was published in 1975, the blessed year in which the errand traveller from the mountain land placed a call to the Goddess from a house in the vicinity of Holland Park, London. He was invited to come to a lovely white house nestled in the Surrey hills. And so he found and he was found, he was taken, stunnedand immerged in the pond.

“The Surrey hills glow like the clinkers of the furnace;
Lambeth’s ValeWhere Jerusalem’s foundations began;
where they were laid in ruins
Where they were laid in ruins from every Nation and Oak Groves rooted
Dark gleams before the Furnace-mouth, a heap of burning ashes.
When shall Jerusalem return and overspread all the Nations?
Return: return to Lambeth’s Vale  O building of human souls! …”