The Gate of Artemis

The Legend of Dagad Trikon. A Summary 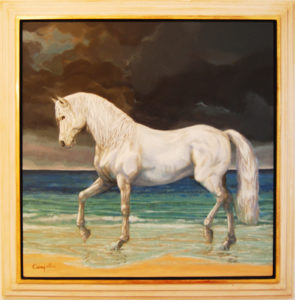 The white horse of the Apocalypse,
the destruction of our eco systems,
the systemic failure of the global financial system,
the oracle of Delphi,
the legend of the Holy Grail,
the sacrum bone at the bottom of our spine,
and…
Getting a life… a better life.
Is there a thread running through all this?
The Legend of Dagad Trikon (see www.dagadtrikon.com) is an action packed fantasy that brings us back to the millennial quest for the perfectibility of man. The first Book narrates how two cousins, Lakshman Khardvansin and Lakshmi Vani engage the search for the lost civilization of the Avasthas, soon helped by the O’Lochan and Jetzlar families. The Avasthas have consigned their magic knowledge in a number of caskets dispatched thousand of years ago to the four corners of the world.
An enigmatic figure of a wizard appears. Lakshman comes to know him as Baldur van Jetzlar, a Dutch billionaire. He meets Lakshman in Iceland and warns him that the enemies of the human race led by the arch demon Thanatophor are closing in. Lakshman feverishly digs up the Casket of the White Feather, under the Vatnajoekull glacier in Iceland. The magic scroll it contains reveals the central path of evolution leading to man’s higher potential.
Baldur’s house explodes in Vassenaar near The Hague and Lakshman experiences much anguish as he thinks their mentor perished. Lakshmi connects with a friend of Baldur, the count Philip von Jetzlar on the occasion of an international conference in Rome. Philip explains much about the wizard, a visitor from an ancient gone by race who has taken the identity of his brother Baldur killed in World War Two and how he is retaining extraordinary life longevity and awesome powers.
The wizard then turns up unexpectedly in Riverdale near New York, and soon identifies himself as the wizard Sanath, Grand Master of the ancient Order of the Hllidarendis. The Order is the custodian of the Avasthic legacy and it knows about a plan for the return of the Stealthstars, the elite Avasthas warriors now incarnated in the human race. Lakshman, with his companions, discovers further the Casket of the Green Wheel. The following enchanted journey leads them from Delphi in Greece, the navel of the world, to the power that controls the balance of the universe located in another world called Vaikuntha. The companions find out in the meantime that they are themselves an advanced commando of Stealthstars sent to achieve mastery over the Deep Way.
The Deep Way is the path to fulfillment that mankind must rediscover because the gate to it has been shut for most people on the earth since the end of the last golden Age.
Alas, many other Stealthstars landing in the human race are destroyed in their young age. The companions discover that the secret of the Avasthas relates to a mysterious Gift, granted by the lady of the Rock, mistress of Dagad Trikon. It is the release of a sacred energy that gives access to the full capacity of the brain. This elixir was known over the ages as Soma or Amrit in Sanskrit, Ambrosia in Latin. The tale of the Holy Grail was its announcement.
Thanks to the archangelic protection of Gabriel (Hanuman) and Michael (Bhairawa) invited by the wizard, the pair of demonic overlords, Belzebseth and Hangker, is defeated during a nocturne battle above the Rhine river, opposite Philip’s Jetzenstein castle.
The second Book, entitled the Riddles of Dagad Trikon, has been completed and would be issued in 2012. It narrates how the companions of Sanath learn to solve some of the critical riddles of the Deep Way.