THE REVELATION TO JOHN –THE APOCALYPSE 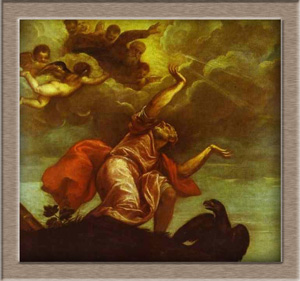 THE REVELATION TO JOHN –THE APOCALYPSE

(In memory of him who wrote these lines and is still walking on this planet, ignored by men who think they are more important than him)

Behold, I stand at the door and knock; if any one hears my voice, and opens the door, I will come in to him and eat with him, and he with me. He who conquers I will grant him to seat with me on my throne. 2.20

Blessed are those who wash their robes, that they may have the right to the tree of life and that they may enter the city by the gates. Outside are the dogs and sorcerers and fornicators and murders and idolaters, and everyone who loves and practices falsehood. 22.14

Description of the Vijaha Vijaya (the struggle of the SY)

I know your works, your toil and your patient endurance, and how you cannot bear evil men but have tested those who call themselves apostles but are not, and found them to be false. 2.2

To him who conquers I will grant to eat of the tree of life, which is in the paradise of God. 2.7

He who conquers shall not be hurt by the second death. 2.11

To him who conquers I will give some of the hidden manna. 2.17

After this I looked and behold, a great multitude, which no man could number, from every nation, from all tribes and people and tongues, standing before the throne and before the lamb, clothed in white robes. 7.9

And God will wipe away every tear from their eyes 7.17

Put in your sickle, and reap, for the hour to reap has come, for the harvest of the earth is fully ripe. 14.15

I will keep you from the hour of trial, which is coming on the whole world, to try those who dwell upon the earth. I am coming soon; hold fast what you have. 2.10

Men were scorched by the fierce heat and they cursed the name of God who had powers over these plagues, and they did not repent and give him glory. 15.8

In one hour all this wealth has been laid waste. 18.19

Description of the Archangels- Vahanas in the order of presentation : Shri Hanuman, Nandi, Bhairava (?), Garuda

And a great portent appeared in heaven, as woman clothed with the sun, with the moon under her feet, and on her head a crown of twelve stars. 12.1

At once I was in the Spirit and lo, a throne stood in heaven, with one seated on the throne! And he who sat three appeared jasper and carnelian, and round the throne was a rainbow that looked like an emerald. 4.2

She brought forth a male child, one who is to rule all the nations with a rod of iron. 12.5

His head and hair were white as white whool, white as snow, white as snow; his eyes were like a flame of fire, his feet were like burnished bronze, refined as in a furnace, and his voice was like the sound of many waters; in his right hand he held seven stars, from his mouth issued a sharp two-edged sword, and his face was like the sun shining in full strength. 1.12

And I saw, and behold, a white horse, and its rider had a bow; and a crown was given to him, and he went out conquering and to conquer. 6.2

He will tread the wine press of the fury of the wrath of God the Almighty. On his robe and on his thigh he has a name inscribed King of kings, and Lord of lords. 19.15

Behold, I am coming soon, bringing my recompense, to repay everyone for what he has done. I am the Alpha and the Omega, the first and the last, the beginning and the end. 22.12