The Gate of Artemis 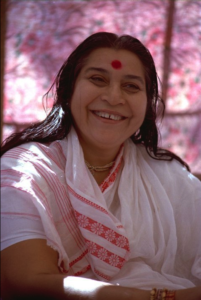 On the 26th February 2011, a silent crowd of thousands of people from all the corners of the world was lining up under a grey sky on the country road of a remote valley in the Ligurian hills of Italy. Standing motionless in dignified silence for several hours, they sang softly and threw petals of roses as the funeral procession slowly drove away. Some felt they were dreaming in a night of sorrow, waiting to wake up, waiting to see the beloved One walking out of Her house to smile at them as She did in the old days.
They had gathered to pay a last homage to the earthly remains of the person they consider to be the most significant path breaker in the history of the world at the beginning of this third millennium AD.
Shri Mataji Nirmala Devi Shrivastava had passed away on the 23th February 2011 in a hospital of Genoa after a period of silent withdrawal that lasted several years.
The world was a very different place on this date of grief in 2011 than when She was born. At the spiritual level, much of the difference for the best that Her followers registered in their daily life must be credited to Her life long vision and action.
Shri Mataji or “the Great Mother” was born at noon on the 21st March 1923 in Chindwara, the daughter of a much respected freedom fighter, Mr PK Salve. During the first period of Her life She joined the fight for the freedom of India, studied medicine and became an householder.
But mostly, in the secret of Her own depth, She deciphered with Her own incomparable yogic powers how best to empower seekers of reality with a higher level of consciousness linked with the hitherto unexplored potential of the limbic area of the brain. Scholars who shall write richly overflowing obituaries will describe, how, thereafter, She traveled across the globe for decades, sharing the great gift She had made accessible at this junction of history for those who so desire: Kundalini jagruti, the awakening of the residual consciousness that manifests spiritual transformation through a concrete happening can now be verified by the central nervous system.
I met Her in August 1975 in Her house in the Surrey near London where Her husband, Mr CP Shrivastava, was serving the United Nations as the Secretary General of the International Maritime Organization. She answered the voluble questioning of this agitated student of International Relations by meditation, the plunge in a cosmic depth of silence and the inexpressible experience of amrita flowing from the top of my head in all the limbs of my body. Who can deliver such moments, which Master can still the rumors of an overheated brain in an ocean of blissful placidity? From this day, I owed it to the might of the powers She manifested, to recognize Her as an Avatar.
On the piazza of the small town of Cabella, a young woman tells a group how a nurse of the hospital was prevented to enter the room, ten minutes before the fateful moment, by a cloud in the shape of an elephant. About during the same period of time, unrelated reports appeared in the Indian press of tears flowing from the statues of Shri Ganesha and Shri Hanuman.
As Her physical body was now leaving Italy, my wife and me remembered the first time we welcomed Her in Rome, the puzzled joy of the first Italian seekers that met Her in this small public programme we had organized in the back room of a library at the via dei Prefeti. India, England and Italy, Her main countries of residence have been graced by Her Presence but She crisscrossed the continents to bring to the seekers Her Gift, giving to all the key to the entrance of the Inner World.
Shri Mataji selflessly empowered seekers to experience Self Realization. She did so with such unconditional love and compassion, responding to all those who came to Her for comfort, that a shrine of eternal gratitude is today burning within the lamps of millions of hearts. She counseled, She comforted, She redeemed. She also established the living linkage between the Hindu Pantheon and the great religious traditions of the world, thus establishing a deep basis for brotherhood, peace and cross-cultural integration.
Those who knew Her today become speechless when they try to describe the subtleties of Her teachings but She left, accessible to all, a method of spontaneous union (sahaja yoga) that is ours to exploit. Perhaps because She is a woman, Shri Mataji was eminently practical and She knew that spirituality, to make a difference, must be practiced in such a manner that it can bring concrete benefits in the life of regular householders. And so it has been.
Her resting place in India near new Delhi will become the destination of grateful streams of pilgrims for ages to come. In an epoch where fake gurus and money making religions enterprises are floated around to expand the boundaries of business to the territory of religion, Shri Mataji, true to the Gandhian tradition, has put an enormous emphasis on honesty and dharma. None has done more than Her to establish the genuineness and profound importance of the spiritual legacy that India can share with the rest of the world. As I write these lines, Her followers are struggling to come to terms with their sorrow, with the immense loss they feel upon the departure of their beloved Mother and Master. However, as they smile through their tears, they cannot mourn for long for She left with them such a bounty of blessings that they will find back their joy in sharing them with others.